I’ve been thinking a lot lately about my name: G. Sherman H. Morrison.

I love my name, but it took a long time for it to evolve into its present form. As a young child, I understood my name to be Jerry. I had two older brothers, Joe and Jim. Three J’s – Jim, Joe, and Jerry. Very neat and tidy, right? Except that Jerry wasn’t really my name.

I didn’t know this as a young child until eventually someone told me that technically Jerry was my nickname. This created a great deal of confusion in my young brain. I don’t recall who told me, I just remember someone saying my full name was Gerald Sherman Morrison. I did have a vague sense that every person had a first name and a last name, but I wasn’t yet aware of the whole middle name phenomenon, so my young brain assumed this meant my name was Geraldsherman Morrison. And with a name like Geraldsherman, having Jerry as a nickname seemed like a good idea.

That’s my name – don’t wear it out

It was even later when I finally figured out Sherman was my middle name and Gerald was my first name. Then one day it also dawned on me that Gerald started with a “G” but Jerry started with a “J.” By this time I was thoroughly confused. My brothers didn’t have these problems because their nicknames made sense. James is nicknamed Jim and Joseph is nicknamed Joe. Those are at least logical. But how in the world do you get from Gerald to Jerry? I was beginning to feel a bit resentful about this whole name thing.

Admittedly, I was at least grateful I wasn’t a Gerry, which has always seemed a little creepy to me. But why couldn’t my parents have really stuck to the whole three J’s idea and made my first name Jerrold? Now that would have made sense. Jerrold naturally leads to Jerry. If they had named me Jerrold, I might actually still be Jerry today. But they didn’t, and I’m not.

The Spear Ruler of Strength Goes to College

In high school I tried to find a reason to like Gerald as a name. I looked up what it meant and was pleasantly surprised to find out Gerald means spear ruler of strength – pretty appealing to any adolescent boy who reads fantasy novels, right? Except that it just wasn’t me. I’m really not a spear ruler kind of guy. Never have been – never will be.

Then I went to college. I met a guy by the name of Fred Clark. We got along famously. Then I found out Fred wasn’t his given name. Well of course not! No one names a kid Fred. Obviously his given first name must be Frederick, right? Wrong! His first name is…George! Okay, if my first name were George, I’d probably want a good nickname too, but why Fred of all things? As it turned out, his middle name was Alfred. Now up to this point, I always thought of nicknames as typically being derived from the first part of a given name, so if your given name were Alfred, your nickname would be Al. But here I was hanging out with a Fred. This was a whole new world to me…and I liked it.

It was in college that I also began to fancy myself a writer, and a writer needs an interesting name. One of my favorite novels (and movies) was A Room With a View by E. M. Forster. I liked that approach – initials and last name. I started putting my name on academic assignments as G. S. Morrison, and for a while that was good. It felt more distinguished, more writer-ish. But everyone was still calling me Jerry even though I was feeling less and less like a Jerry. I was getting restless for something different.

I had triple-majored in Economics, Political Science, and Spanish. Along the way I became interested in environmental issues. And I was (and am) a person of faith. Somehow all this mish-mashed into what I decided I wanted to do – work for a group that was trying to get churches more involved in the environmental movement. I had no idea if such a group existed, but I figured if it did, it was probably in Washington DC, so I moved there. I decided I would make this fresh start with a new identity: G. Sherman Morrison. I would introduce myself to everyone as Sherman. I would start going by my middle name.

Part of what I liked about this idea was that Sherman had far more personal meaning to me than either Gerald or Jerry. Sherman is my father’s middle name, and it was his father’s first name, although apparently everyone called him Shorty. At any rate, I liked how there was some history, some real family meaning to Sherman. And frankly, it was just more interesting than Jerry or Gerald. Way more interesting. Sherman. Sherman’s March. Sherman Tank. Don’t squeeze the Sherman. The Shermanator. Yes, far more interesting.

Then there were those cartoons back in the 1960s featuring Mr. Peabody the amazingly smart dog and his adopted human son…Sherman, who happened to have red hair just like me. The most recent incarnation of this duo has seen a distinct improvement in Sherman’s hair. In fact, I wore my hair like this through most of college. Never mind that the Sherman in these cartoons is hopelessly dorky. Then again, if the shoe fits… 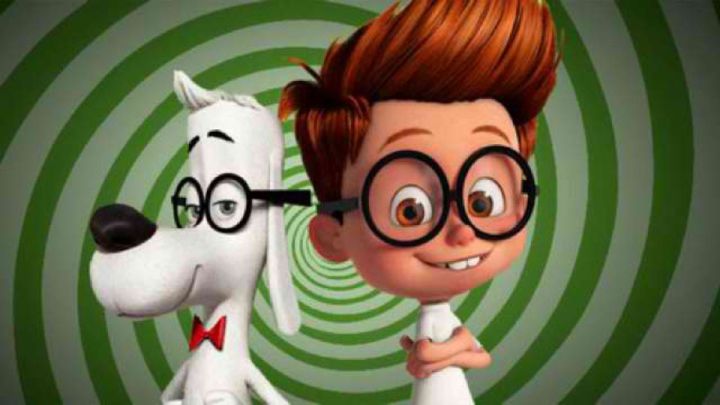 So people were calling me Sherman. I felt like a whole new me. I loved it. It didn’t take long before my boss (yes, I found the group I was hoping existed – the North American Coalition on Religion and Ecology) was calling me Sherm. I wasn’t sure I liked this, so I made sure he knew to always first introduce me to people as Sherman, not Sherm. And there were many introductions over the five years I worked there – to Al Gore, John Denver, Olivia Newton-John, even His Holiness the Dalai Lama, but those are stories for another time.

My girlfriend during those DC years, who later became my wife, took to calling me Shermy. I liked that. Part of the reason I liked it was its link to Peanuts. You’ve probably watched A Charlie Brown Christmas during the holiday season, but did you know the kid wearing the green shirt in the dance sequence is named Shermy? And he’s really bustin’ a move in that scene – kind of an early moonwalk or maybe it’s the zombie or the Frankenstein. Yes, in the early days of Peanuts, there was a character named Shermy. I love that. He didn’t last long, though.

Three was Great, but Four is Even Better

Fast-forward a few years to getting married in 1995. Heather Herring was willing to alter her name by taking on my last name, so it only seemed fair to me that I take on her name, so I added Herring as a second middle name. The decidedly not-so-progressive folks at the Clearfield County Courthouse had a hard time getting their brains around why I was changing my name after getting married, but eventually capitulated. And thus was born my true identity: G. Sherman H. Morrison. If you emphasize the “H” when you say it, it kind of sounds as if you’re cursing.

Fast-forward another eight years to 2003 and we were anticipating the birth of our child. Her name is a story in itself, but when we were spending time looking through baby name books I made a startling discover. One of the name books had a list in it titled Names that are so far out they’ll never be “in” again. These would be the names you wanted to avoid at all cost. It wasn’t a very long list, but can you guess one of the names on it? Sherman! That pleased me immensely. I much prefer being “out” than “in,” and I’ve got the name to prove it.

Holding Steady at Four (names, that is)

So here’s the thing: Heather and I are no longer married. I suppose people will probably think it’s strange to keep my now ex-wife’s maiden name as a second middle name, but I am. She seems okay with it, which is good because it’s who I am.

2 thoughts on “What IS my name, anyway?”